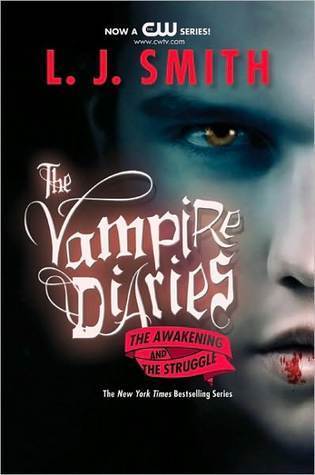 So, I decided to reread the books simply because I was feeling a little nostalgic after the series finale of the TV show, not so much for the show, but for the books.
Now, the one thing I clearly remembered from the first time I read these books, which I think was almost ten years ago, was how much I hated Elena Gilbert and after finishing the books I can say those feelings were justified.

Elena was just as self-centered, stuck up, and bitchy as I remembered her. The thing I didn’t remember is how she does change. She does kind of become a nicer person, but it was unfortunately to be worthy of Stefan’s love and also she only really seemed to be nice to Stefan. She was still kind of a bitch to her friends, which I didn’t like since they’ve known her a hell of a lot longer than Stefan Salvatore.
Surprisingly, I liked Stefan a little more this time then I did the first time I read it. When I first read this book, I found Stefan boring and whiny, this time I found him a little more interesting then I did previously. I mean he was still sometimes a bit whiny, but I could get past that.
Damon was a lot more vicious, creepy, and just altogether unsettling then I remembered. I think it might also have to do the fact that I really love Ian Somerhalder as Damon on the show that I might have gotten the two versions of Damon confused in my mind. Not saying the TV show version of Damon doesn’t do some messed up stuff, but I guess I just forgot about the real personality and viciousness book Damon has.
I can admit that TV show Bonnie has definitely over the years made me forget how kind of pathetic book Bonnie is. She was just so naive, cried almost over everything, and just did whatever Elena said. I also realized that the show essentially gave Bonnie book Bonnie’s first name and the fact that she has magic, but gave show Bonnie Meredith’s personality. The whole time I was reading this I couldn’t help, but think that show Bonnie reminded me a lot of Meredith.
There were other small things that I noticed that I had forgotten, like Tyler’s last name in the book is Smallwood and in the show it’s Lockwood. I also forgot that Caroline and Tyler were instantly a thing in the book. I also forgot how horrible both Tyler and Caroline’s characters are in the book compared to their TV show counterparts.
I’m sorry that this review is basically more of a comparison of the book and show, but like I said it’s been awhile since I read these books and the show is still relatively fresh in my head.
I do enjoy L.J. Smith’s writing and storytelling, but it does feel pretty simple to me and she definitely plays up the high school drama/childish attitudes.
So, after rereading the books, I agree with my original score of

and that rating is for both books. I will say that while these are not the most amazing books I’ve ever read and they do have their issues, I still feel that you can still find some enjoyment out of them.